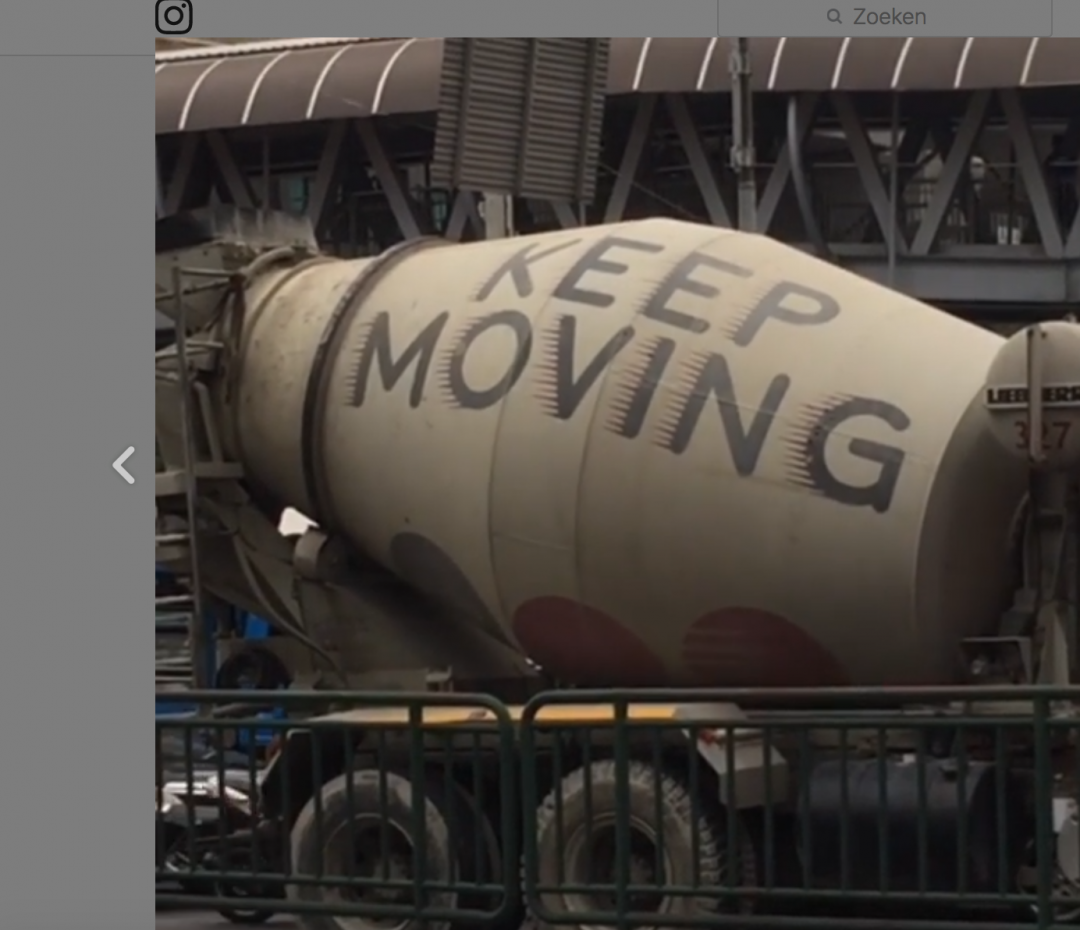 Text as a retrospective on the solo-exhibition ‘Pilot’ of Ricardo van Eyck at P/////AKT, Amsterdam, 2019

There are stickers on objects, stickers on other stickers, a derelict half-demolished concrete street ping-pong table, a folded-out cardboard box used as temporary furnishing for a garden bench, a gate in front of a gate, a recently painted gate behind which an afterimage of dry bits of paint can be seen on the underlying information board, shabby graffiti, a recycling print on a white skip bag, unintentionally decorative public works on a wall, a Mercedes sign that rhymes with two ventilators, posters on graffiti, graffiti on a poster, mirrors with warped reflections, an intentionally illegible tag, an exotic yet almost entirely illegible print on a fly curtain, a chair repaired with another chair, a welcome mat draped over a pole, a poster blurred by the sun, a disused decorative dolphin used for storing cleaning equipment, paper on a drain that reveals an imprint of that drain, a forgotten glove on the point of a gate, birthday decorations on graffiti, a broken JCDecaux billboard encased with red and white barricade tape indicating that it is out-of-order, a poster of a lonely mouth above a random door, floor racks folded into pyramids, a seemingly disproportionate abundance of stacked shelves in various colours, a large piece of cardboard on the floor forming an abstract drawing, more mirrors, more chairs, symmetrical trails in the snow as evidence of engine activity, decrepit neon letters, stickers on a protective case in front of an engine, a print of a female face on the back of a delivery van and around 1000 variations upon all these possible themes and many more. They offer a look inside Rick’s thoughts and are an invitation and momentary chance to see through his eyes.

Besides this inundation of everyday state of affairs to which 99% of humanity in passing would miss, this overview shows something more fundamental. Namely, that looking is an activity and an event. You have to be on your feet and on the move in order to see. Along with a glimpse through his eyes, the overview offers the arsenal of images from which Ricardo works. It is a constant source of fleeting moments of recognition, surprise, discovery, failure, coincidence and even something that resembles beauty, though thankfully more often of a sad and therefore comic type.

We’re shown the results of intentional or on the contrary unintentional actions. Everything is equally important or unimportant. There is no judgment made upon use, function or value. When viewed from the other side, backs are fronts. A poster that once screamed for attention dissipates through time and sunlight into the background. All of a sudden, camouflage catches the eye. Tracks refer to other tracks. Something about Rick’s work is always on its way to become or rather has completed its temporary transformation and waits for the next. His work is entropy turned image. Having emerged from a previous system, everything searches for freedom and disorder which yields, under his guidance, its own system in search of freedom and disorder.

Then we return to his studio. During his time at the HKU Academy, a pair of jeans had caked themselves into the floor forming a new layer. Unsurprising in an environment in which fat layers of spray paint, lacquer, acrylic, latex, dust, spray-foam, dregs of an impressive diversity of materials, water and solvents were in the process of evolving into new elements. Like his photos, found images were reused as the basis for further experiments. These leftovers instigated the birth of a new image that was developed in a blown up form into a wall-sized work, which in turn he sawed into pieces with his own meticulous design and the help of a jigsaw. Likewise, while at De Ateliers, the space filled itself with parked objects, images and detritus in transformation towards successful failures and failed successes. Everything seemed poised to return in full potency to a pronouncedly minimal variation of itself on a completely different surface, executed with the careless virtuosity of a craftsman. Layers were undressed and covered up again like a stubborn archaeologist who takes it upon themselves to determine which logic is of any importance. New puzzle pieces were discovered if the old ones no longer made the cut. Everything had the potency to become something else. Everything moved because Ricardo moved.

And now we are in P/////AKT at his solo show Pilot. Come on in. Ricardo has converted the space into his work. Although certain works move me and inspire me to write more about, I decide to leave them unnamed because the totality tells me much more. Walls are moved around in order to show the space between; saw cuts in the wall lead your eyes to more interventions elsewhere. A stage as display binds the space together. Although the entire installation appears to be light and spacious, a closer look reveals a closed network of references, afterimages, stacks, reallocation and rhyme that characterize Rick’s work so well. It is finished and unfinished at once, exactly as it ought to appear. The results of activity in a recent history guide you through the various layers of form and meaning. And as if it all isn’t equivocal enough, the totality shows a pronounced concentration in which all that is cursory repudiates itself immediately afterward. Call it a pilot, but if there’s no sequel to this show, I will be lost for words.

Lastly, let’s return to his collection of images on Instagram. A film shows a dingy cement truck. The cement mixer at the back turns slowly but steadfastly, and we slowly read the words printed upon it: ‘KEEP MOVING’. A moving observation from an artist and significant in the light of Ricardo’s work. I would say perhaps as close as one gets to a possible Oomph. It’s oafish and small and special and sensitive and large and common. It isn’t pretty and not something that is generally attributed any importance. However, it is loaded and represents a crossroad of many paths. It says: keep moving Ricardo and keep moving Rick’s work, do not let yourself be contained by someone else’s disorder. And it says the same to us as viewers, as fellow-artists, as people, as things, as dots. Keep moving and look and move and watch and move and watch and move and watch and move. Sure that something will happen that will make you watch and move.